Per kit: 2 x 35g mini skeins, copy of the pattern in a file pocket, and a selection of postcards from the Groam House Museum Shop

Sets are shown as ‘out of stock’ as they must be bought directly from Groam House Museum, details below:

Please email paul.pritchard@groamhouse.org and indicate your preferred set – following this you will be emailed by Groam House Museum with details of their Bank Account. Once you have transferred payment the set will be posted.

The Bain’s Toorie Bunnet Sets have been prepared in collaboration with Groam House Museum as part of their Celtic Knit-Along. You can join the Knit-Along via the closed Facebook group – Knit-Along Group (request to join group).

Each set has two mini skeins (35g each) of Gotland Alpaca undyed yarn and is enough to knit one Bain’s Toorie Bunnet, designed by Barbara Pritchard. If you’d prefer just the pattern it can be bought as a PDF from Ravelry or LoveCrafts. 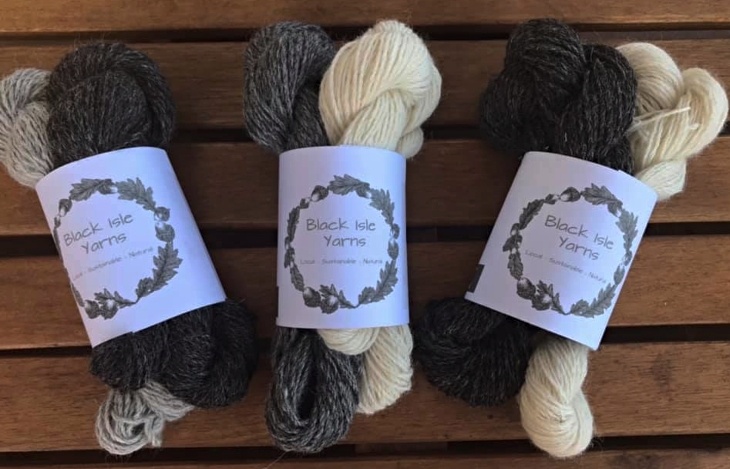 Black Isle Yarns are gently and minimally processed by The Border Mill from real animals who enjoy an outdoor life (in beautiful surroundings, lucky beasts!) – consequently you may find the odd bit of vegetation in your yarn, these are easy to remove as you knit and, if you’re lucky enough to find some, I hope will remind you of the special animals who have grown your yarn!

I do my best to show the yarn colours as accurately as possible but please be aware that colours do vary from monitor to monitor.

Your yarn should be gently hand washed in cool water using pH neutral wool wash such as Eucalan or Soak. This may seem time consuming at first but should soon become an enjoyable part of working with a gently treated natural product.

All my dyed colours have been thoroughly washed and rinsed however there may be a slight release of residual colour on washing – this shouldn’t change the overall yarn colour or alter other colours.