Monkeyface and Co also originates from Jane’s Culgowrie Flock. This is probably a one-off yarn, and is spun with two year’s worth of fleece from Monkeyface and last year’s clip from her two ewe hogg daughters – Stinker and Stinker Sister! Monkeyface herself is of uncertain origin, I think possibly Gotland with a northern European short-tail sheep breed, perhaps Shetland or Hebridean. Either way her fleece is delicious and her daughters’ fleeces are very special given their dad was a Wensleydale tup. I remember Jane excitedly contacting me two years ago to say that Monkeyface had just had two black ewe lambs to the Wensleydale tup………….and eagerly awaited last year’s clip when they would first be sheared as hoggs (I kept Monkeyface’ 2018 fleece in anticipation, to add to her 2019 fleece and those of the Stinker Sisters).

The resulting yarn, spun beautifully by The Border Mill, is the finest I’ve had spun to date at approx 370m/100g. As with Longwool Blend it is quite a dense, two plied yarn, which will be a little more fine than most other yarns of the same m/100g.

In terms of colour it is a very rich molasses, almost black, with the occasional silvery fibre. I’m planning to keep a little for myself and intend to knit a Skipwith Cardigan, designed by Rachel Atkinson. The pattern is in her beautiful book Beginnings, but can also be bought as an individual pattern from Ravelry. Monkeyface and Co has drape and lustre and is a strong fibre. It has a fairly smooth handle but is a little less smooth then Longwool Blend. I’d say that a lot of people would find it suitable next to their skin, but perhaps not on their very sensitive areas. 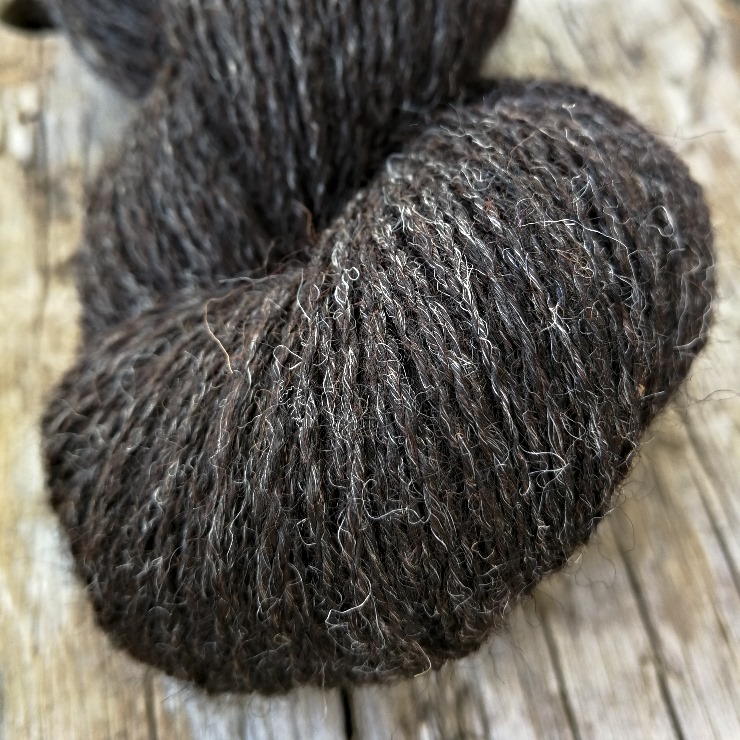